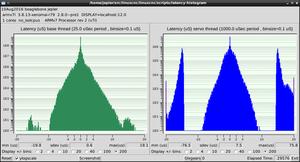 Last month, I worked on Xenomai support in LinuxCNC just so I could list it as a feature bullet. What should happen this month but a visit from old-time LinuxCNC developer jmk, who was trying to get a HAL-based virtual control panel running on a Beagle Bone Black, for which there's a quite decent Xenomai kernel build available. (I think we have the MachineKit folks to thank for that)

By my standards, the Beagle Bone Black is quite under-powered; for instance, its 512MB RAM is too little to even build some of the source files in LinuxCNC; and even if it did (with an added swap file, for instance) the build times can be nigh-intolerable.

So starting with a wheezy image with xenomai kernel intended to run MachineKit, together we've hacked together a configure time flag to add the configure flag "--hal-only", and ported the MachineKit hardware driver "hal_bb_gpio" over to LinuxCNC. For the moment this lives in the linuxcnc.org branch jepler/master/halonly but hopefully it can be cleaned up and merged to master branch before long.

And what is jmk working on? Apparently it's something that will be used by the Tesla Orchestra in an upcoming performance.