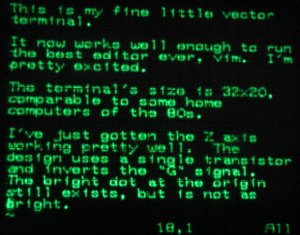 (M)(L)
Vector terminal with Z-axis
With a simple transistor, the Z axis works pretty well. The linearity is better now that I'm using some 10b2 tees and terminators (50 ohms) on the X and Y inputs, too. The correct termination would be 75 ohms, but I take what I can get.

The rise time of a color channel is 20ns, and the fall time of the transistor is 60ns. 20ns is much slower than the VGA dot clock of my laptop, which is supposed to be 150MHz. I may be running into the bandwidth limits of my scope here---I think it's 100MHz. 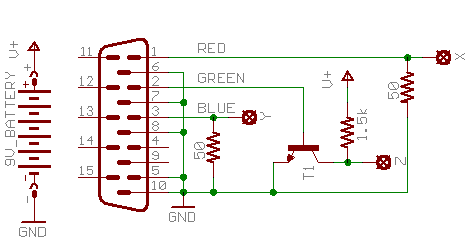 approximate schematic of the scope circuit
I think I'm nearly to the point where I'll make a circuit board. I'll have to decide whether to run from a 9V battery or a 12+V wall-wart. The latter might give better Z-blanking, and I'll sure test it before deciding. The former is easy, and already tested too.

Honestly the terminal isn't that useful---256x256 pixels isn't enough to hold much text---so it's nearly time to get back to doing a game. Chris has also suggested replacing the output parts of xmame/xmess with something that will draw properly on the scope, which would be cool except that most vector games seem to have resolution on the order of 1024x1024, not 256x256.