photos strobe
With the help of Chris and Emily, we got some pretty good photos this evening.

First, we changed the flash's 200uF capacitor for a 33uF one. This decreases the total light of the flash as well as the duration of the flash. Most of these photos were taken at ISO 100, aperture from f/6.3 to f/16, with the shutter open for one or two seconds. Before the change, I had to use an extreme f-stop of f/28 and motion blur was visible in many photos.

It seemed like Chris spent most of the time running the camera, and Emily and I got to destroy things.

We broke balloons, pasta and ice. We also did one non-destructive thing, coins dropped in standing water.

The pasta research was mentioned a few months ago and a memory of it was what prompted me to try breaking the pasta (we actually used linguine, I think). 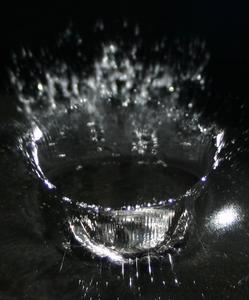 (M)(L)
Quarter dropped in standing water. Notice that the ridges on the edge of the quarter are reproduced in the pattern of the splash. 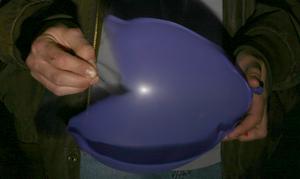 (M)(L)
Emily is the one popping this balloon. Notice that the visible balloon is the far side (closest to Emily). Even though we took this after speeding up the flash, there is still a lot of motion blur here. 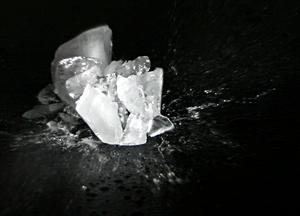 (M)(L)
Ice thrown onto cast iron surface from above. Unfortunately, this photo doesn't capture a strong sense of motion. 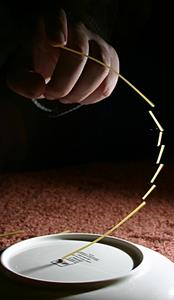 (M)(L)
Pasta being snapped. Researchers have recently discovered why pasta always breaks into at least 3 pieces when snapped in this way.