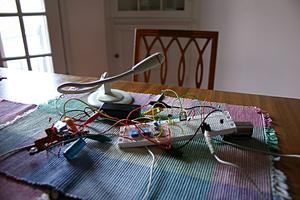 (M)(L)
Prototyping the strobe trigger circuit
I was originally inspired by the Make article on strobe photography (excerpt). There is a kit available for purchase, but I wanted to make my own.

The schematic for the circuit used in the kit is on makezine.com, but it seemed very complicated, and some parts never did make sense to me (in particular, the way the outputs of the two second-stage amplifiers are tied together). So I looked further afield and found a much simpler circuit. I also found a ton of great information in the Strobe FAQ.

My breadboarded version is somewhat different--notably, the 1M feedback resistor on the left amplifier is not there, and instead of a fixed voltage at the non-inverting input of that amplifier, I have another potentiometer. I copied the trick from the makezine circuit of having both a microphone and a phototransistor as triggers, switched by the microphone jack itself. In this circuit, the light trigger seems to go off when the light level falls. I haven't actually used the light trigger to get any photos, in part because the photodiode is only sensitive to IR, so my plan to interrupt a red laser beam with a falling object didn't work.

My circuit is powered by a 9V battery, and the flash (salvaged from a '110' camera boughat the local thrift store for $2) is powered from 2xAA batteries. To decrease the strobe power and time, I've replaced the original 200uF cap with a 33uF one. It also seems to recharge instantly (<1 second) instead of over several seconds.

The main shortcoming of this circuit is the lack of a delay, something provided by the 555s in the makezine design. When taking sound-triggered pictures, a time delay can be realized simply by moving the microphone! Units defines the speed of sound as 331.46 m/s, so moving the mic 1 foot gives about 1ms delay.

Of course, this tactic won't work when I get a visible-light trigger. Instead of using 555 timers, I'm considering two things. First, to simply put a resistor and capacitor on the first compator's output, so that it takes time for it to rise far enough to trigger the second comparator. Second, to use a microcontroller with a built-in analog comparator (such as the at90s2313 from the AVR family). This should let me add other features that come to mind, like a mode where the delay is advanced 1ms after each exposure, to capture a series of drops falling.

The trouble is coming up with ideas for things that haven't been strobe-photographed to death already. Any ideas?