A few more features trickle in to CVS 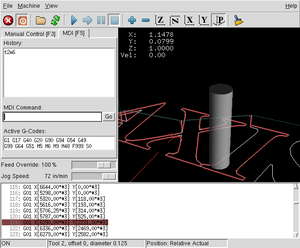 A transparent tool of the correct diameter
Since my last note, there are more new features in AXIS. Here are some of the more interesting changes: There are some emc2-specific improvements as well: At the moment, AXIS CVS is only known to compile against emc2. Support for other versions of emc is "up in the air".
(originally posted on the AXIS blog)