PyVCP: A Virtual Control Panel that integrates with AXIS 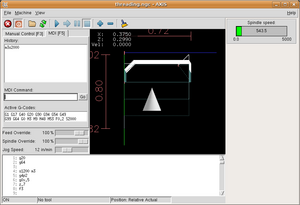 AXIS with PyVCP showing spindle speed
Anders Wallin, AKA etla, has written a new Virtual Control Panel. Over the weekend, I did a bit of work to make it integrate with AXIS. You can see the latest results on the wiki.

This presents a lot of new opportunities for users to customize their AXIS GUI. In the sim/lathe example, the current spindle speed (based on encoder input) is shown. Other uses would include showing the current adaptive feed value, a better velocity estimate, or anything else that exists in HAL. There are clickable buttons and sliders as well, so you can directly set outputs, start or influence classicladder programs, etc.

This feature is too late to make it into the upcoming 2.1 release, but I anticipate that it will be possible to use PyVCP by copying a few files from the development version and adding some lines to ~/.axisrc as shown in the wiki.
(originally posted on the AXIS blog)