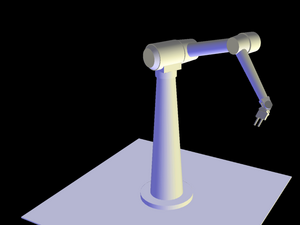 John K's Puma Robot
After I did an exceedingly lame example, John K picked up my example and ran with it, producing a very cool visualization of a puma-style robot. In the development version of emc, this can be hooked to the new puma robot kinematics module, and you can sit and watch as the hypnotizing robot arm mills your nc file in its virtual world.
(originally posted on the AXIS blog)