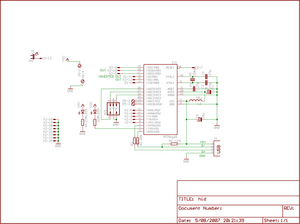 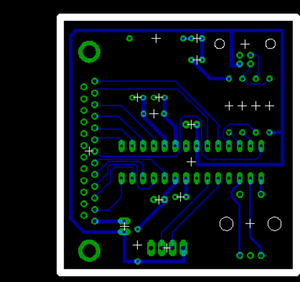 Using hal_input and halui you can make keys on any linux input device perform user interface actions like "cycle start", jogging, and so on.

HIDKeys is a GPL, AVR microcontroller-based firmware which implements a USB HID device with no special USB interface chip required. By default it emulates 17 keys on a keyboard (maximum one keypress at a time), but with firmware modifications other inputs such as analog inputs, quadrature jogwheels / MPGs, or key scanning matrices could also be supported. LED outputs are also possible.

My modified design has one quadrature jogwheel, up to 8 other "button" inputs, and one LED output. It is programmed through the parallel port connector, and most I/O pins are also available on that connector. Included in the tar file are the eagle schematic and single-sided circuit board, along with the modified firmware source.

If you are building a custom panel, are comfortable with microcontrollers, and don't have enough spare inputs elsewhere, this is sure an option to consider.