And the first new features start appearing in CVS...

Newer: As seen on the internet
Older: EMC 2.2.1 released

(M)(L)
Up and over: intelligent probing of a simulated hemisphere
Now that 2.2.1 is out, the CVS TRUNK is open again for new features. Chris has one of the first, and it sure looks nice. Three new probing words have been added, and from these primitives it is possible to build smarter and probing algorithms. 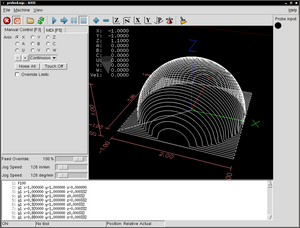 (M)(L)
the results of the probing program shown above, turned into a gcode program to mill the same shape
With only G38.2, each probing motion has to start at a Z coordinate that is above the probed piece at every location, leading to most of the time being spent in useless Z motion. Using the new G38.5 and G38.3, it's possible to lift the probe just above the piece, then over towards the next probing location.

The smartprobe.ngc program could be further enhanced to have a local estimate of slope and even curvature, further reducing the number and length of in-between probing steps for typical surfaces.

Another trick: program G91 G38.3 Z.00001 F10 / G90 to store the current location in parameter #506x. There are bound to be interesting uses for this in O-word subroutines (e.g., to work relative to the initial point without using G91 relative motions through the whole subroutine).

Fenn suggests that another nice probing program would use a waterline (constant Z) to find contours on the object. This should also be possible with the new probing primitives, and I hope somebody will contribute a script to do it.
(originally posted on the AXIS blog)