emc2 cnc zenbot zervo mesa
After some tiny little problems with ruined stepper drivers that I don't care to talk about, I kept moping on IRC until Sam found me these pittman dc servos and I ordered some, intending on upgrading the zenbot to servos. (in case the page is gone by the time you read this, they are pittman 9236 motors with a 500-line 2-channel encoder; they turn out to have an unusual 1" long shaft with flat, contrary to what I saw in Pittman datasheets)

With copious help from Chris, I designed a pulley reduction system with a 12:28 ratio that would connect to the machine using the existing holes for the NEMA 17 steppers and attach to the screws with a coupling similar to the original couplings.

Chris also did all the CNCing for these parts, of course.

The motor is mounted using hex standoffs and hex socket cap screws, which are counterbored on the far side so that the heads do not stick out of the plate. One is a simple hole; three are arc slots. The belt is tensioned by pushing firmly on one of the pivoting standoffs before tightening the screws. (The calculated pulley distance of 1.385" based on tooth counts turns out to be pretty close to right)

The most finicky part of the construction was probably the pulley for the motor: I could not find a pulley bored to match the .1562 motor shaft. Chris rose to the occasion by reaming a 1/8 pulley out to match.

Today, with the finishing touches put on the parts for the first axis, I finally hooked the motor up to emc (using a mesa 5i20 with 7i30 servo driver daughtercard; by the way, the 794194-1 receptacle that mates with the 7i30 is not difficult to populate using a basic crimp tool) and tuned it a bit. Things appear promising---when in motion, it's hard to do more than slow it a bit it by pressing against the motion. And even though I'm new to PID tuning I quickly got some fairly decent results.

Next come the other two axes and lots more tuning and testing. 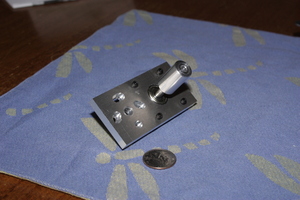 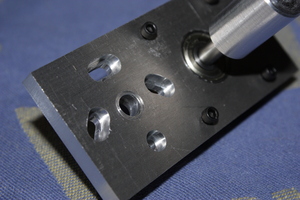 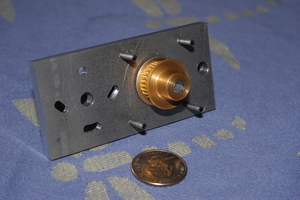 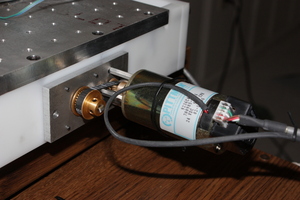 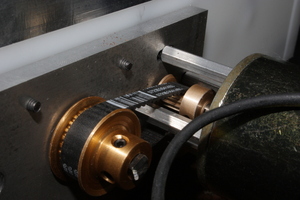 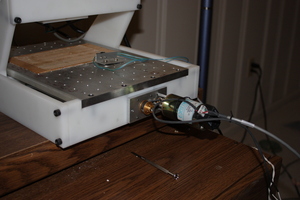 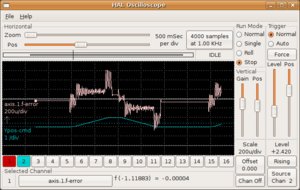