The growth of Unicode over time 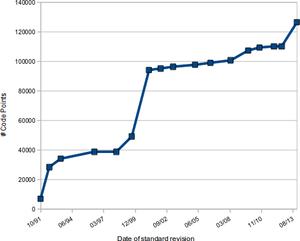 The growth of Unicode over time
This graph shows the number of defined code points in unicode from its first release in 1991 to the preset; the last data point is the number of code points in Unicode 6.2 plus all characters from the "pipeline table" of proposed new characters (retrieved January 2013). However, it is likely that only a subset of those characters will be in the next unicode standard.

Unicode is organized in 17 planes with a total of 1,112,064 code points; of those, two planes (131,072 code points) are specified for private use, so future Unicode standards can assign a total of 980992. Almost 13% of these code points have a present or proposed use.

Unlike the allocation of internet addresses, it seems likely that the allocation of Unicode code points is likely to already be slowing down. On the other hand, there sure are a lot of code points in the pipeline, as evidenced by the large uptick at the end of the graph. Personally, I'd bet against actually exhausting Unicode in my lifetime, as long as it only includes terrestrial languages. If the aliens come to earth and we try to add their scripts to unicode, all bets are off.