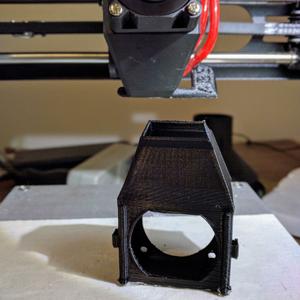 Subtitle: Why didn't anyone tell me to block the print cooling duct?

As you'll recall, my primary complaint about the MPSM has been that it's advertised as printing ABS but never has for me.

I can now credit two easy modifications with making it possible to print ABS:

The first one, which I had done a long time ago, is to insulate the heated build plate. I did this by simply folding a paper towel and placing it just under the build plate. This allows bed temperatures of 75-80C to be reached. (These bed temperatures can't be selected at the preheat screen but can be in the slicer. Weird.)

The second one, which I only recently heard about, is to block the lower exit of the cooling shroud, the one which cools the print. This can be done in the first place with more of your masking / painter's tape. Once you've done that, print an MP Select Mini ABS Flag in ABS. I selected the fully blocked one fwiw.

With it I've printed several things in ABS that I would not have been able to print otherwise, such as the replacement fan shroud which you see in the photo.

I'll keep printing primarily in PLA and PETG, but now I can say I successfully print in ABS as well.

PS Remember to remove the ABS flag before switching to PLA filament!