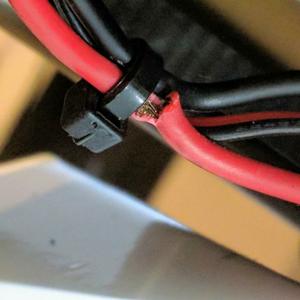 I estimate I've made between 200 and 300 individual prints, though I stopped tracking at around 200.

The first hardware failure was in the hotend side quick connect fitting for the bowden tube—the tubing itself would pop out midway through a printing job, and that would consistently ruin prints I bought a set of 5 replacements from the internet, and that fixed that.

The second hardware failure is more severe, because to resolve it I'll have to work with wiring: the bed has stopped heating in some Y-positions. I had not made any of the hardware mods that are supposed to improve the durability of these under-table moving wires.

An inspection turned up that one of the large-gage wires is almost totally cut through by the cable tie under the bed, which sure explains the failure to heat.

For now I'll just write off the ability to print in ABS and PETG, and stick to PLA, and wait to see what fails next. If I get suitably motivated, I might try to fix the heated bed. I'm not thrilled with the idea of junking it, because the obvious replacement would be the MPSM v2, but my friend Sam has already had the bed thermistor fail on his v2 after less than two weeks.