In October and November 2012, we honeymooned in Australia, visiting Queensland, Victoria, and Tasmaia; we also took brief trips into New South Wales and South Australia.

We took 8446 photos in all (mostly on Jeff's camera), but we've trid to be reserved in the number we put online. 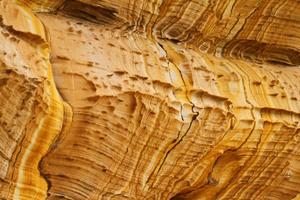 (M)(L)
Sandstone carved by the sea and colored with iron.
We spent one of our last days at Maria Island, just off the east coast of Tasmania. It was a beautiful, uninhabited island, with tons of amazing scenery. I've narrowed down our pictures to a few of the best.

First Half of Tasmania 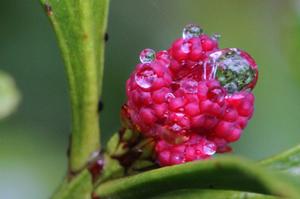 (M)(L)
Water droplets in the Tasmanian temperate rain forest
Here are more shots from Tasmania, this time from Jeff's camera in much more detail! The first set is from Cradle Mountain on our rainy, cool full day there, where Jeff found some cool rain drops and lichen. Then we visited the Tamar Valley Wetlands near Launceston and enjoyed a lovely walk. Finally, there are a few shots of neat insects from Windsong B&B where we stayed on the east coast of Tasmania. 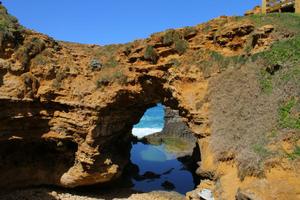 (M)(L)
The gorgeous Grotto, along the Great Ocean Road.
The Great Ocean Road travels along the coast of Victoria to the west of Melbourne. It's an area of amazing beauty and contrasts, well loved by tourists. We enjoyed the dramatic ocean views as well as the wildlife. Jeff got some amazing photos along the way. 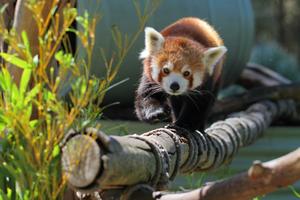 (M)(L)
Red panda on the way to food.
Jeff took some really neat pictures in Halls Gap Zoo, not far from Horsham. 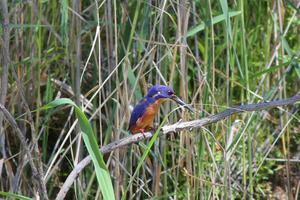 (M)(L)
Azure Kingfisher
We took a lovely cruise on the Murray River, between the border of Victoria and New South Wales, courtesy of Kingfisher Cruises. It was a fun trip exploring a shallow river area with a wide mix of birds. 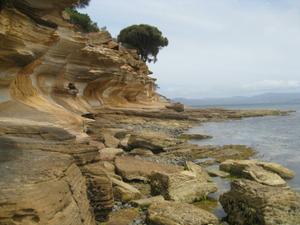 (M)(L)
The painted cliffs at Maria Island
For the second half of our tour around Tasmania, we went to Freycinet National Park, which was absolutely gorgeous. Had a great hike up to view Wineglass Bay, and then visited other bays and areas of the park. We also stayed not to far away at Windsong B&B. We then spent a day on the tiny Maria Island enjoying being away from people and cars. For the last day, we explored the Royal Tasmania Botanical Garden in Hobart. 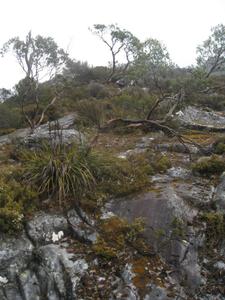 (M)(L)
Cradle Mountain Walk
The first half of our Tasmania visit. The first part is all at Cradle Mountain where we explored many trails. This was the only truly cold day of our trip, but we still saw many beautiful places on our hikes, and wombats, echidnas and wallabies in the wild. There's also pictures here from the beautiful Cataract Gorge in Launceston. 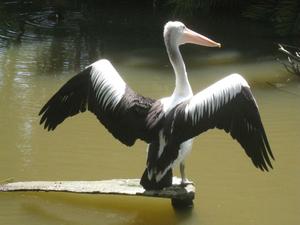 (M)(L)
Australian Pelican.
We started out the next part of our trip in Werribee, where friends live, and they took us to the Werribee Open Range Zoo, run by the Melbourne Zoo. There you can ride in a bus around the safari area, seeing plenty of mainly African animals along the way. You can also walk around other areas and explore other animals. They also took us to other sites in Werribee. The next day we wandered around the entire Melbourne Zoo, which is quite an amazing place. 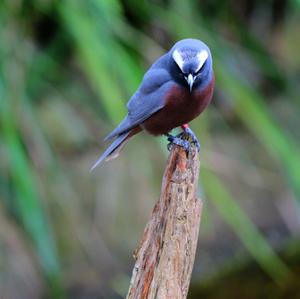 (M)(L)
White-browed Wood Swallow
After Wilsons Promontory, we visited Healesville Sanctuary, one of the Zoos Victoria sites. At Healesville, all the animals are Australian. The day was overcast and lightly rainy, but not enough to interfere with our enjoyment of the animals.

They had displays of wombats and Tasmanian devils, but the animals were not visible when we went by. They also had a platypus on display, but the lighting was too dim to be able to get a photograph. Too bad, as we never got a platypus photo on the whole trip, though we did see them in zoos twice. 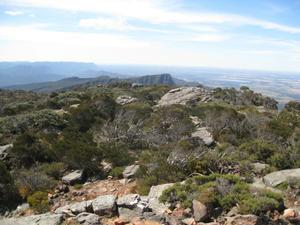 (M)(L)
Beautiful view from Mt. William in the Grampians.
Here are some fun photos showing a wide variety of places we visited over the course of a week in Melbourne and cities around Victoria. These include the Halls Gap Zoo (a small rural zoo with quite a few animals), Horsham (small town where Ingrid's friend teaches), Grampians (beautiful national park), Geelong (city south of Melbourne with the National Wool Musem), CERES Environmental Park (with community gardens, small farms, delicious cafe, plant nursery, tons of educational displays, and much more) and some community gardens on public housing estates. 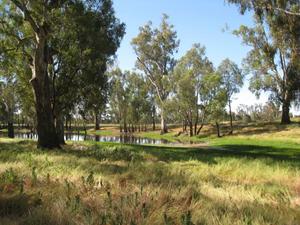 (M)(L)
A billabong!
After returning from Queensland, we explored a variety of sites to the east of Melbourne. Wilsons Prom was a beautiful park on the southern coast, and we went on a couple of nice cruises on the Murray River. 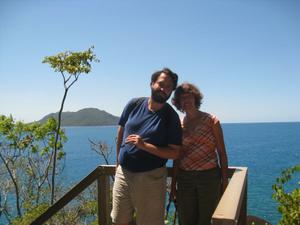 (M)(L)
Tropical journeys
On our way to Cairns, we stopped at Granite Gorge, a private park. You can buy food to feed the Rock Wallabies (supposedly it doesn't make them fat, but they sure like it), and then take a nice hike over many boulders. It was a fun and very scenic day, and then we swam for a bit in their pond to cool off (though Jeff sunburned his back here). There's also a few more photos here from Fitzroy Island, where we enjoyed the rainforest in addition to the reef snorkeling already posted. Finally, we have some photos from our walk around Lake Barrine, a beautiful lake inland from Cairns. 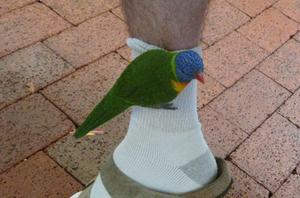 (M)(L)
Rainbow Lorikeet
Wildlife Habitat at Port Douglas, a zoo of North Queensland animals, including a great variety of birds, mammals and reptiles. There was plenty to see and do, and plenty of pictures to be taken. We'd already seen many of the birds in the wild, but it was neat to see them up close. 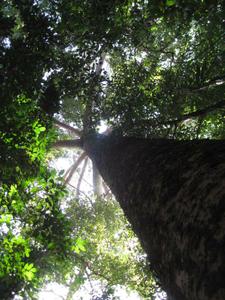 (M)(L)
Really, really big tree.
The gorgeous tropical rainforest of North Queensland. It was full of amazing plants and was lush everywhere you looked. These photos are from a couple of sites—the first set are from the area around Mossman Gorge, where we went on a Dreamtime Tour with an Aboriginal guide. He told us both about what traditional life had been like, but also what life is like for people now and what traditions they have been able to hold onto. The second set is from Cape Tribulation, a little further north, where we took a number of different walks in the forest. 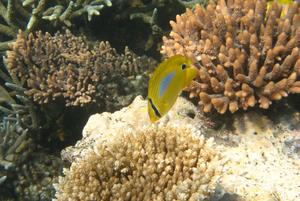 (M)(L)
img_6780-crop
During our week in Far North Queensland, we took two snorkeling trips on the coral reefs. The first (and better) was Quicksilver Cruises' deep reef trip on a big boat where we snorkeled from a pontoon platform. The second (and not quite as good) trip was from the beaches of Fitzroy Island, which is much closer to the mainland. 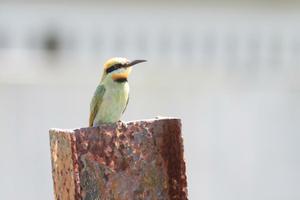 (M)(L)
Rainbow Bee-Eater
On our first full day in Port Douglas, we went on a day-long birding tour with Murray Hunt of Daintree Boatman Nature Tours. We first went on a morning boat tour with one other person, and then in the late morning and afternoon he drove us to a number of sites that provided numerous opportunities to photograph birds (and a few other things). I took about 900 photos. The first six are from Ingrid's camera, the rest are a selection of the better ones from mine. 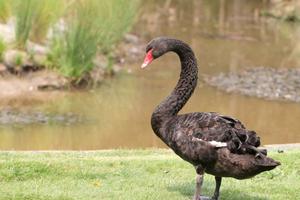 (M)(L)
Black Swan at the gardens
On the second day of our trip, we spent the morning at the Royal Botanic Gardens Melbourne. Here are a few of my photos from our visit. (The first three are Ingrid's.)