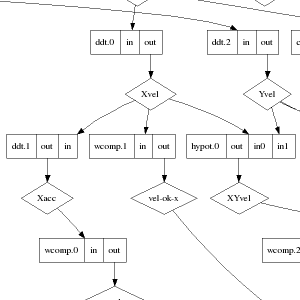 Mill configuration graph
After Tom P. manually converted part of a HAL configuration into "dot format" to produce a nice png drawing, I have experimented with doing it automatically by parsing the output of halcmd. Here is the program, as well as some of the results.

With emc running and halcmd on your PATH, just run net2dot to create a .dot file, or pipe net2dot to dot to render an image:

Update: A new version of net2dot also understands 'linkXX' commands, so it can be used on .hal files in addition to to working from a running hal. It will infer directions from arrows when they are given. Run it like so: