Newer: HAL: the trouble with doubles
Older: Second evening with the Zenbot 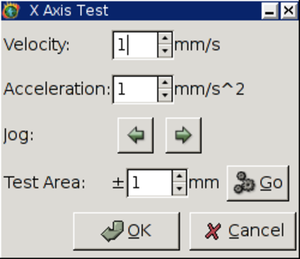 (M)(L)
Test This Axis
After not touching stepconf for a few weeks, I dug back in on Sunday. I also used this as an opportunity to try out git for distributed project development, but that's another blog entry...

Stepconf is in the emc2 CVS TRUNK and will presumably be a part of emc 2.2 when it's released. The documentation is online too: http://linuxcnc.org/docs/devel/html/config/stepconf/index.html

Besides actually producing a working configuration file for the zenbot, this version also lets you test acceleration and velocity limits without leaving the stepconf gui to run emc. Finally, doublestep is used to get higher step rates with lower BASE_PERIODs as well.