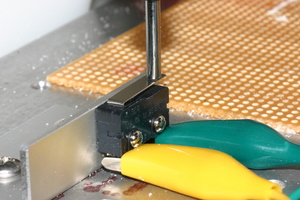 (M)(L)
Probing for tool length
Chris was kind enough to help me make an angle bracket to mount a tool length sensor.

The switch itself is a $3 Radio Shack microswitch. It's mounted on a piece of aluminum angle, which Chris cut and drilled on his bridgeport, then tapped a couple of #2-56 threads in by hand. I can place it nearly anywhere I like on the table thanks to the regular 1" grid of tapped holes. For now I've placed it in front but I think I'll move it to the rear instead (it would get in the way of mounting circuit board blanks) 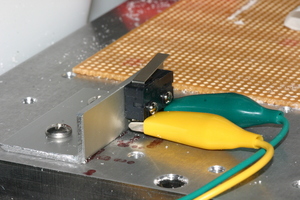 (M)(L)
Another view which shows the bracket better
I probed at F3, which is less than one step per servo period (16000/in, 500uS). Over 36 trials, the difference between the greatest and least probed points was 1 mil. The standard deviation is 0.2 mil. This is quite good enough for switching from the trace separation milling bit to a drill bit or endmill.

After taking Chris's advice to probe near the switch instead of the end of the lever, I'm getting results that are even better, much less than 1mil difference over 100 trials.

I'm also working with chris to add some limit switches--maybe this weekend I'll have something to show for those efforts.
(originally posted on the AXIS blog)