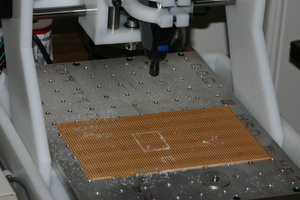 (M)(L)
New metal table
Nearly a year ago, I got an inexpensive CNC router off ebay. It is constructed from HDPE, and the original table was made from wood. Unfortunately, I found that the table was not flat enough for milling circuit boards. With a few upgrades, though, I've made a usable circuit board and have good hopes for the machine's usefulness in the future.

At CNC Workshop I picked up a big piece of 0.500" aluminum at an attractive price, and Chris was kind enough to turn it into a new table for the zenbot. The table matches the original wood table in size, but features a 9x13 grid of threaded holes on 1" centers for securing the work. (the original table has an odd setup of threaded holes on 2.25" centers plus a scored grid with 3/4" spacing) 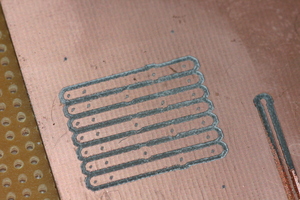 (M)(L)
Trace Isolation Milling
The other improvement I've made is to use the pluto-step component to get hardware step generation; this allows me to go back to 1/8 stepping and get rid of the base thread for a nice responsive UI. The honking noise I originally found to be more severe at 1/8 stepping is now gone, presumably a combination of wear-in and the higher-quality pulse generation from pluto-step.

Finally, I added software compensation for backlash, around 0.005" on both X and Y. 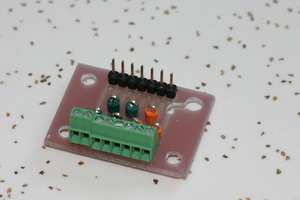 (At the right-hand side of the Trace Isolation Milling photo you can see a trace I tried to mill on the old table; within the space of an inch or so it goes from being too deep to not cutting away all the copper.)

The defect that is clearly visible in the finished circuit (a break-out for some little brush servo motors I picked up at CNC Workshop) is because I did not adequately tighten one of the tools. It got pulled out of the Dremel's chuck while milling out one of the mounting holes, and then cut into the board instead of doing a rapid move to the next hole location. It cut into one of the traces, but didn't cut through it, so the board is still usable.

It's still not perfect. Here are some of the future ideas I have: