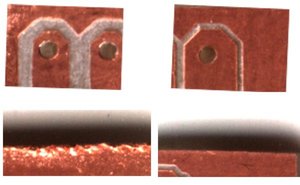 (M)(L)
Milling comparison. Left, Dremel 300; Right, TB Spindle.
I bought the Wolfgang Engineering Triple Bearing spindle off ebay. The seller, Richard Stethem, apparently custom builds each one. The customized spindle mount was exactly to my specifications and mounted on the Zenbot without fuss. Having milled one tiny board on it, I have to say that the difference between this and the Dremel 300 is night and day, with the TB Spindle playing the part of Day.

This image (combination of 1200DPI scans of two different boards) gives some indication of this. Both used the same feeds and speeds, and each used the spindle's top speed (the TB spindle really only has one speed). 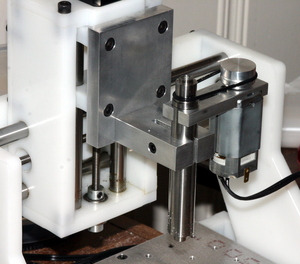 (M)(L)
The spindle mounted to the Zenbot
The top two images show trace isolation milling. The nominal isolation width should be .0064" based on a depth of cut of .0055 inches and a 60-degree vee tool. On the TB image I measure about 10 pixels of isolation, or .0083". On the dremel image I measure 25 pixels, or .0208. I attribute the difference to the runout of the Dremel spindle.

The other main visual difference is in the cutout pass with a 1/16 end mill. The TB gave a nice smooth edge, while the Dremel gave a chewed up nasty edge.

By specifying a different vertical hole spacing on the spindle mount compared to the original one for the Dremel, I also extended the "Z" travel of the zenbot by a half inch. This extra half inch gives just a bit more room for my hands when changing tools. The new mount ends up with the tool further forward than the original dremel mount, but it's still within the bounds of the table.

I notice that every time I replace a piece of plastic with a piece of metal my CNC machine gets better. Let this be a lesson to those of you who want to make machines from a combination of plastic cutting boards and plywood!
(originally posted on the AXIS blog)