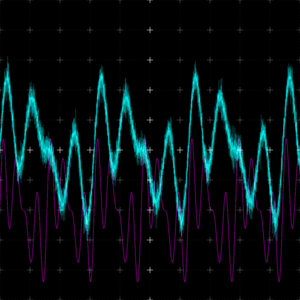 Image generated by waveform demo
It's late, but I just wanted to toss this online. It's a Python / Cairo / Gtk based waveform viewer. Maybe it will become the foundation for a replacement for both emc2's halscope and the sump.org logic analyzer GUI, when I find a hundred hours or so to work on it.

The main feature is that when a trace has more than one sample per horizontal pixel it goes into a sort of "envelope" mode, with a fainter trace showing the min and max and the bright trace following the median (not mean) value.

The demo writes out 3 static pngs, then shows a window that you can re-size to get an idea of the responsiveness. I have only run on a very beefy machine so far, which gives the impression that all is well. Resizing is tolerable, and exposing (and, by analogy, scrolling, when I get around to it) is pretty responsive.