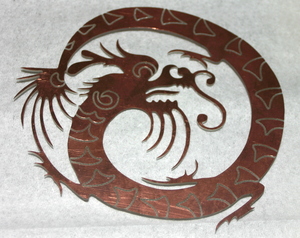 (M)(L)
Front-lit dragon
I started with a piece of dragon art I found online in gif format, converted to vector with inkscape, played a tiny bit with paths, and then converted to gcode with skencil. (an update of my skencil gcode converter is way overdue as I discovered several important problems there -- hopefully I get around to posting that soon) 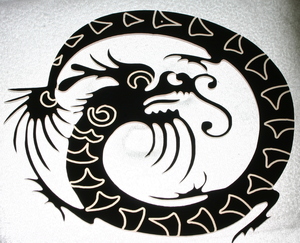 (M)(L)
Back-lit dragon
The milling is all done with a 0.80mm (about 1/32in) mill at two depths: one at about the same depth I usually use for clearing copper, and one to cut out the total shape.

The milling went nicely at about 16ipm for the shallow cuts and 12ipm for the deep cuts (all programmed at a conservative F8 but with me playing with the feed rate override up to 200%). The pointy bits are fairly sharp, and I was afraid I would break one while untaping the board from the table.

I hope it will make a nice window-hanging due to the way it lets the light through.
(originally posted on the AXIS blog)