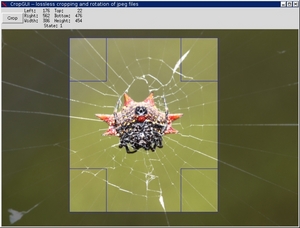 Of the pictures from my recent trip I'd like to put online, I've found that in 75% of the cases where I want to retouch the photo, it's to crop it and nothing else. Since I shoot in jpeg, it's a lossy process to load the jpeg in gimp, crop it, and write the result.

But it turns out that debian's jpegtran has a "-crop" flag which performs lossless cropping of jpeg images as long as the crop is to a multiple of what the manpage calls the "iMCU boundary", a (usually?) 8x8 block of pixels. This feature was pioneered by Guido of jpegclub.org some years ago.

There's apparently a nice Windows front-end to this program, but I didn't find a Linux one. So I wrote one! It's pretty basic, but it gets the job done. You can download it below.

To run cropgui, either list files on the commandline or select them from a file browser (in the latter case, you're returned to the browser after cropping the selected file(s); hit 'cancel' to exit completely). The output filename is chosen automatically, and never overwrites the original (but it will silently overwrite an earlier cropped version). For example, if the input is "moon.jpg" then the output is "moon-cropped.jpg".

Images are automatically scaled by a power of 2 (e.g., 1/2, 1/4 or 1/8) in order to fit onscreen. After releasing the mouse button, the cropped image boundary may move a little bit; this represents the limitation that the upper-left corner must be at a multiple of 8x8 original image pixels.

cropgui is written in Python and requires python, python-tkinter, python-imaging, python-imaging-tk, and libjpeg-progs. It is available under the terms of the GNU GPL version 2 or later.

Future improvements might include rotation (interactive and exif-based automatic). Interactive performance improvements would also be welcome, but I don't have any ideas about how to achieve that at the moment. (luckily, lower-powered machines also tend to have lower pixel counts; this makes the scaling factor more extreme and that improves performance)