Newer: A use for log1p
Older: Hosting Troubles 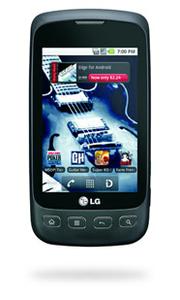 Her old phone was an LG Remarq (feature phone with slider keyboard), but the service on Sprint was costing her $82 a month, and she was starting to want smartphone features like decent access to Google calendars and her e-mail. Well, she can have it all, and for only about $30 a month on ting!

If this article helps you decide to switch to ting, please use my referral code to get $25 off your phone (and $25 off a monthy bill for me!).

Update, August 2012: The LG Optimus S is gone from Ting's store, but at the moment they've got a successor phone in the the LG Optimus Elite ($193, as well as some much more powerful phones like the Samsung Galaxy SIII with LTE.

Imagine my horror when the phone arrived, and it's a sprint branded device. Unlike my HTC phone, which is an unbranded version of the HTC EVO Shift 4G, apparently ting is selling the same their LG Optimus S phones as Sprint. Unfortunately, that means the phone comes with Sprint junk like "Sprint ID" which I won't be able to remove without rooting the phone. It also means there's a sprint logo on the phone itself that can't be removed without damage or disassembly. Oh well.

The first day, I installed a system update and some basic apps; on wifi, the phone feels quite responsive.

Sunday morning, we went through the activation process on ting.com. It took a few hours for her number to be ported, but by the afternoon Ingrid's old phone was defunct and her new one was working for calls and texts. Pretty painless! She soon found someone stuck with a Sprint contact and a busted phone to hand down her Remark to.

Stuff like Maps, Navigation, and Tethering also all work properly and reliably.

Ingrid's old phone has bluetooth; a few months ago, we backed up contacts to Linux, but of course her contacts had changed in the meantime. However, using a similar procedure it was possible to transfer the ~200 contacts to the Android phone as .vcf files.

After this, it's quick to import the .vcf files using the Contacts app. After syncing that up to Google, Ingrid used the gmail website from a desktop computer to link up and eliminate duplicate contacts.

(actually, it was a bit more involved than that because I made some false starts that ended up creating 3 copies of every contact in gmail; Ingrid was a good sport about cleaning up the mess I made)

I'm a little bit concerned about voicemail: as it's a sprint phone, it has sprint "visual voicemail", but as far as I know ting does not support visual voicemail. So I'm unsure whether the status bar voice mail indicator will work right. Ingrid depends on her voice mail, so it will be important for this to work right.

Apparently there's an unofficial CyanogenMod port for this phone, Inferior Human Organs. But Ingrid's not as much of a tinkerer as I am, and I think she'd rather just have a working phone.

As I mentioned above, Ingrid's plan on Sprint was costing $82 a month. (plan cost of $70 plus taxes and fees) I've been paying an average of $21 on ting for the last three months. (plan costs of $17); After 3 months, our typical bill is $39 in plan costs, $45 with taxes and regulatory fees. Compared to the $150 we were paying a few months ago when both of us were on sprint, or the $82 that Ingrid was paying alone on sprint, this is an excellent deal for us. It not only blows Sprint out of the water, but it also comes out well cheaper than two no-contract plans on other services like boost mobile or virgin mobile.