(M)(L)
City of Dresden including the Hausmannsturm and Hofkirche
What was supposed to be the final week of our journey was spent in Dresden, visiting Ingrid's relatives. The weather was not as nice as the rest of our trip, but we enjoyed seeing everyone and exploring both familiar and new places. We also had some great meals, and had better luck finding vegetarian food on this visit that in the past. 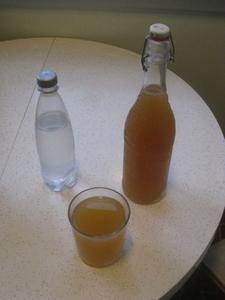 (M)(L)
A glass of Apfelwein with sparkling water
At the start of the month I embarked on a project to make Frankfurt-style apfelwein. Today Chris and I bottled the stuff, then sampled it at dinner with Bill and AJ. 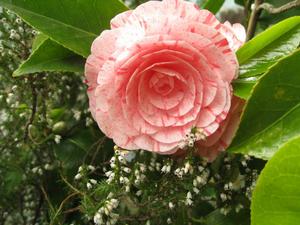 (M)(L)
One of many camellias at the New Botanic Garden in Marburg.
We spent a day visiting Marburg, near Frankfurt, which is a wonderful town with lots of neat old architecture and a fantastic botanic garden.

(M)(L)
Colorful orchid.
The Frankfurt Palmengarten on our first visit in early April. It was the last day of their annual orchid show, so we took lots of photos. I can't identify most of them, but they're still enjoyable to look at. 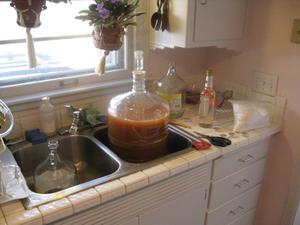 (M)(L)
Mixing the cider ingredients
Inspired by a recent metafilter thread I've decide to try to make apfelwein (frankfurter apple cider). The post linked to a massive forum thread on it, which has been distilled (ha!) down into a wiki page. Like it says, there's simply nothing like apfelwein available in the US, which is unfortunate since I like the stuff so well. I'm particularly missing it now, having just returned from three weeks in Germany.

Today, in honor of national homebrew day, I put on my first batch of cider. Hopefully the odors of fermentation won't be too strong for us to handle. Unless something goes wrong, I just have 4 weeks of waiting before the recipe's ready. Watch this space for more details around June 1, and wish me luck at my new hobby! 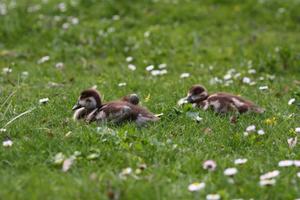 (M)(L)
Goslings sleeping
Here are a few of the things that caught my eye on our second visit to the Frankfurt Palmengarten (botanical garden).

The photos that were the most fun to take were the goslings; I was surprised that the parents (who were right nearby) didn't take much notice of me, even when I got within 2-3 feet of their babies! The little ones barely noticed me either. I took 200 images of them alone, so it was hard picking just 3 to show here.

I've just returned from a vacation in Germany and France. Over the next few days I'll be putting some of my 600 photos online, roughly in chronological order.