Don't wreck your system with miniconda/anaconda

I guess this software is a tolerable way to install those libraries and packages needed for so many machine learning things written in Python. But annoyingly, it wants to "go to the head of the line" in front of system Python. This is reallllyyyy not what I want.

I noticed that the little blob it deposits in ~/.bashrc can easily be surrounded with a function definition. So, now to activate anaconda in the current shell, but never replace/hide system python in a normal shell, I can just type "fml". 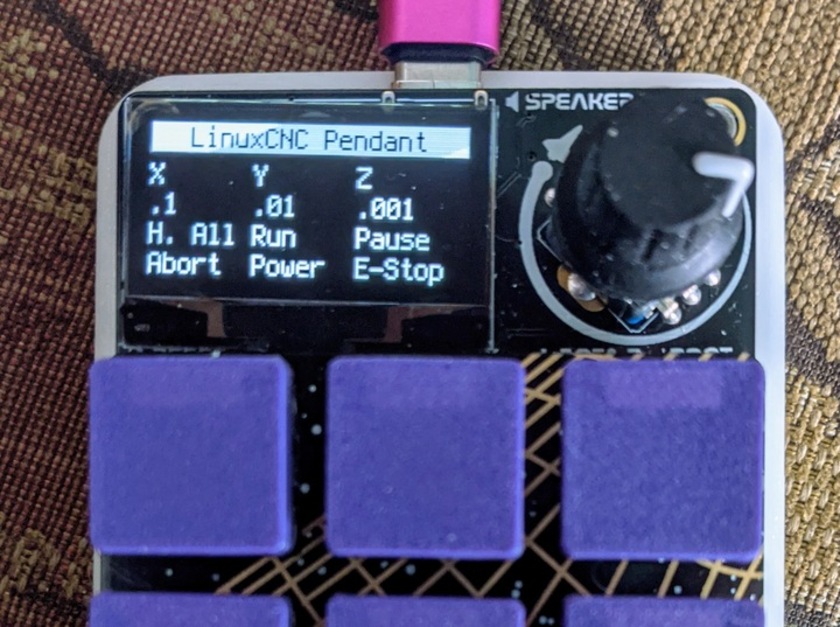 CircuitPython recently gained the power to have custom USB descriptors. With these, we can define a USB HID device that will work with LinuxCNC's hal_input.

For instance, the Adafruit Macropad has a (very coarse, just 20 detents/revolution) encoder, 12 keyswitch positions, and an OLED screen.

The two pieces of software below, when placed in the CIRCUITPY drive as boot.py and code.py configure it for use with hal_input, using a halcmd line similar to loadusr -W hal_input Macropad. I haven't actually done the work of hooking it all the way up to Touchy yet, but it causes all the buttons & the encoder to appear in halcmd show pin.

This is just the device I picked first; there's nothing to prevent you from hooking up more exotic things like voltage/temperature monitors through added CircuitPython code. Addition of output reports for status indicators is left for the motivated reader.

The Si5351 and related clock generators are very flexible, but they are a bit cumbersome to "program".

The basic design of the Si5351 is that an incoming frequency is first multiplied to create a high internal frequency (nominally in the range from 600MHz to 900MHz), then divided to create an output frequency. The multipliers and dividers have restrictions on their ranges, there are just 2 PLLs but 3 output clocks, and certain types of configurations (e.g., "divisor is an integer multiple of 2") are said to give lower jitter outputs than others.

The datasheet advising users on how to create their own register values is very complicated and some of the parts resist comprehension even after multiple readings. Thie chip maker Silicon Labs provides a graphical closed source Windows program for generating register maps, though some internet commenters regard it as buggy.

This program represents my own effort to create a frequency planner. It neglects some datasheet rules, mostly related to output frequencies above 50MHz or so. It tries to

(Of course, if you measure your reference clock as 25MHz + 13.37Hz and plug that in as the --input-freq then almost everything is related to that clock inexactly, so the fact that the clocks will still be really, really close to the requested value is very nice.)

It does not directly create a register map, but the values shown are easy enough to convert to the form used in the CircuitPython adafruit_si5151 library. Sadly, as CircuitPython does not support the fractions module, it's not currently feasible to run this code on a CircuitPython board directly controlling the si5351 chip.

Generate 315M/88 (NTSC colorburst), 4.43361875M (PAL colour carrier), 25.8048M (UART clock) all exactly from a 25MHz reference clock or crystal. However, the PAL colour carrier will have more jitter since it uses a fractional divisor:

The source is available in a github gist:

Precision vs Accuracy: A Clock 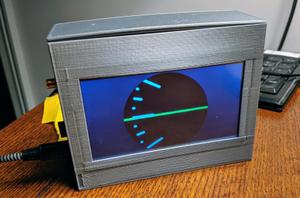 I was inspired by this watch face design (I think that's the original version) and by the arrival of a "OCXO", a very reliable time keeping circuit, to finally make an electronic clock.

Accuracy: Between hardware and software tuning, the OCXO keeps time with an accuracy of possibly better than 100 microseconds per day (loses or gains well less than a half second per year) (Yes, I'm deliberately ignoring a lot about crystal aging here!)

Precision: The time displayed is to the nearest minute, and the touchscreen setting mechanism is (deliberately?) poor, making it hard to set the time closer than +- 2 minutes or so. Oh, and it takes a good fraction of a second to update the screen anytime it changes. (The best way to set it seems to be to wait until a few seconds before 6AM/6PM and plug it in, since it boots with that time showing) 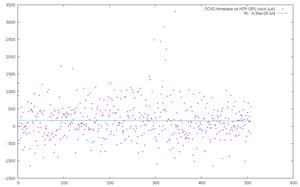 (M)(L)
Estimated accuracy of the OCXO vs GPS: 60 microseconds per day?
The clock consists of: .. all in a 3d printed enclosure that's not quite the right size.

The dial as an animation (1 revolution = 12 hours)
Along the way, I added an even more accurate time source to a Raspberry PI (GPS with PPS) so that I could even measure the accuracy of the OCXO, and discovered I even have a GPS module which was negatively affected by the GPS rollover that occurred in April of this year (the second 1024-week rollover). This leads to a surprising sequence of clock arithmetic, and finally gpsd decides the GPS is returning a date sometime back in 1963.

How do you check a signature on a PGP/Mime message

…I'll answer in Python. First, put your whole message in a file in unix "mbox" format (this will be the problem if you use some brain-dead GUI mailer!), then in Python extract the signature and the signed message, and finally invoke gpg:

Red: the perfect unit of measurement?

If you're like me, when you write software that has to store distance information in floating point, you shudder because you know you have to pick either inches or millimeters, leading most common multiples of the other as numbers that are not exactly expressible in binary floating point.

So let me make a simple proposal: define red = 625nm, so called because light of 625nm is commonly perceived as red. Now, you can store all of the following as exact integers:

Unfortunately, the following are still not exact:

Here are some other visible-light inspired fundamental distance units and the common distances they can express exactly as binary fractions:

computed by colors.py, frequency range for each colorname from wikipedia. Unlike the original 625nm "red" constant, common lengths are binary fractions rather than whole numbers. And of course these aren't nice integer multiples of nm either. I wonder why no oranges make the table.

SNTP from Python: getting server's esimate of time quality

Every once in a while, Python is too slow

sorttop: show the biggest values as a program runs